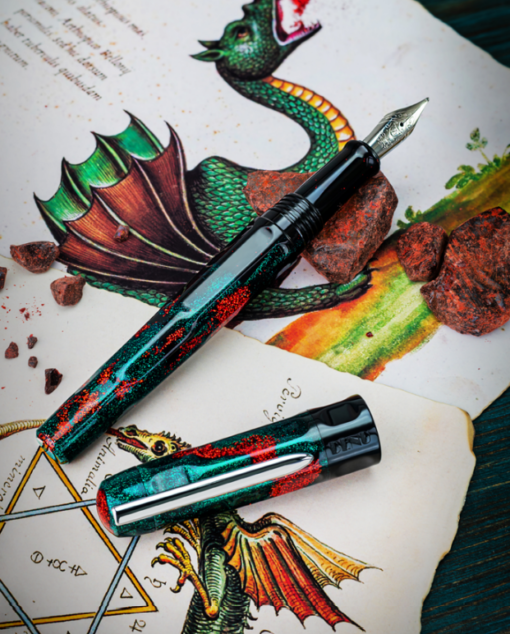 A bit about the Talisman collection:

BENU is proud to introduce their marvelous new collection of pens, Talisman. This collection is inspired by great legends and the mystical beliefs that surround talismans, amulets, and other magical items used to bring luck, protection, money, love or special abilities. Get your Benu Talisman Dragon’s Blood fountain pen here today.
Whether you are an avid believer in the magical power of plants, stones, herbs, and crystals, or you remain skeptical to this mysterious and unknown world, there indeed lies a sprinkling of curiosity and intrigue within each of us. Believer or not, we can all admire the fabulous myths and ancient beliefs behind these good luck charms.
We invite you to step into this hypnotizing realm of folklore and see for yourself if there is any truth to be found beneath the fables. Who knows, perhaps this fascinating magic might make its way into our modern world!
The Talisman collection is made complete with 5 pens, each named after a special substance: Mandrake, Dragon’s Blood, Peacock Ore, Fox Gloves, and Edelweiss. Drawing inspiration from certain tales of yore, we set out to convey these stories not only in the color and style of each pen, but by actually infusing a part of each substance* into the five different designs.

Inspiration and substance added to the material of the pen:
Dragon’s Blood

Known historically as Sanguis Draconis, Dragon’s Blood has been used in magic rituals and alchemy for centuries. Ancient traders obtained it from small islands, where the dragons were believed to dwell. To the west are the Canary Islands and eastward is the legendary Socotra. However, the magical blood wasn’t yielded directly from the dragons, but from a genus of curious trees named after female dragons, Dracaena. The most famous species in horticulture was named Dracaena Draco, otherwise known as the Dragon Tree.

The bright red resin that is obtained from Dracaena Draco is surrounded by many ancient myths and legends.

The mythical Dragon Tree first came to light in the story of Hercules and his encounter with Ladon. As the Ancient Greek Legend has it, Ladon, a serpent-like dragon, was sent by Hera, the Queen of Heaven, to protect the sacred fruit that she had gifted to Zeus. The hotheaded Hercules was sent on the dangerous task of stealing the Hesperides apples, with the fierce dragon on-guard close by. Against all odds, the mighty Hercules slayed the ferocious Ladon, and the dragon’s blood spilled out over the land, sprouting ‘dragon’ trees. These Dragon Trees, with their long, slender trunks and prickly leaves, continue to bleed the death of Ladon with an oozing, reddish sap whenever cut.

Another famous tale that aims to explain the Dragon Blood origin comes from the East Indian ships, which sought the blood for Hindu rituals. It is written in ancient scriptures that a great battle ensued between a dragon and an elephant, representing the gods Brahma and Shiva. The dragon and the elephant perished in mortal combat, while the result of the mingling of both creatures’ blood became a powerful and valuable commodity, better known as Dragon’s Blood.

In old Europe, Dragon’s Blood became a vital component in the alchemical arts and the concocting of magical potions. During the Middle Ages it was used to make healing potions or to mark armor invulnerable and weapons unbreakable.

Today, Sanguis Draconis continues to be used by the sorcery crowd. You will find the oldest specimens in the beach towns of North America, from Santa Barbara to San Diego. Some local people still believe that this resin is a cure for all – to heal fevers and ulcers, and as a useful magical tool for protection. In American Hoodoo, African-American Folk Magic, and New Orleans Voodoo, it is used as incense to cleanse spaces of negative entities or influences. It is also added to red ink to make “Dragon’s Blood Ink”, which is used to inscribe magical seals and talismans.

For those who have lost themselves in the magical worlds of Tolkien and Rowling, Dragon’s Blood stands as a living example of these fantastic legends.