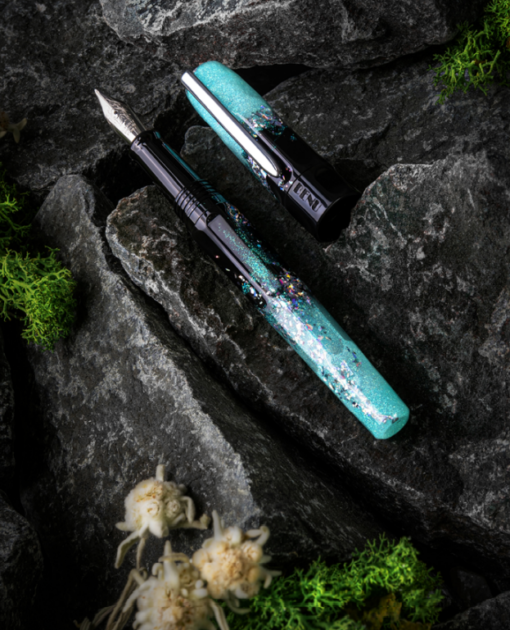 A bit about the Talisman collection:

BENU is proud to introduce their marvelous new collection of pens, Talisman. This collection is inspired by great legends and the mystical beliefs that surround talismans, amulets, and other magical items used to bring luck, protection, money, love or special abilities. Get your Benu Talisman Edelweiss fountain pen here today.
Whether you are an avid believer in the magical power of plants, stones, herbs, and crystals, or you remain skeptical to this mysterious and unknown world, there indeed lies a sprinkling of curiosity and intrigue within each of us. Believer or not, we can all admire the fabulous myths and ancient beliefs behind these good luck charms.
We invite you to step into this hypnotizing realm of folklore and see for yourself if there is any truth to be found beneath the fables. Who knows, perhaps this fascinating magic might make its way into our modern world!
The Talisman collection is made complete with 5 pens, each named after a special substance: Mandrake, Dragon’s Blood, Peacock Ore, Fox Gloves, and Edelweiss. Drawing inspiration from certain tales of yore, we set out to convey these stories not only in the color and style of each pen, but by actually infusing a part of each substance* into the five different designs.

Inspiration and substance added to the material of the pen:

Most people will recognize the word “edelweiss” from the famous 1965 musical romance, Sound of Music. Covering the concepts of romance, bravery, and love to the motherland, the show’s writers, Rogers and Hammerstein, couldn’t have chosen a more fitting symbol than the edelweiss flower as the movie’s main theme tune.

Edelweiss, otherwise known as Leontopodium Nivale, is a mountain flower that grows high in the Alps and has a long history in mystic folklore. This special and potent plant is often associated with certain myths related to proving one’s worth and discovering true love.

Once upon a time, high in the wintry Alps lived a hauntingly beautiful queen with a heart of pure ice. Stories of her beauty reached many doomed suitors, who dared to proclaim love for the queen. Since her frozen heart was unable to love, she soon tired of them and ordered her loyal goblins to throw the hapless men to their deaths. One day, an ordinary shepherd found his way to her cave and the queen fell in love with him. The jealous goblins, fearing their mistress would marry this mortal and abandon them, threw him into the abyss. When she learned of the tragedy, her heart melted enough for her to shed a solitary tear. That tear became the first Edelweiss.

Although this tragic tale earned Edelweiss its popular name “The Tear of the Snow Queen”, another legend made the flower a true symbol of eternal love. The narrative that captured everyone’s attention was told by Berthold Auerbach back in 1861 in his book, Edelweiss. The tale tells the story of a young man who risks his life to collect rare Edelweiss flowers for his lover as proof of his daring and brave nature. Risking his life to gift such a precious flower was the purest act of devotion, and so it went in history that women would wear edelweiss in a necklace as a token of their partner’s love.

Many years ago, people also believed that this unique flower had magical powers. They used it as incense and swore its smoke would drive away evil spirits from their farms and homes. Its medicinal benefits were perpetuated later in poems and stories: one of which was the 1970 classic Asterix in Switzerland. This comic tells the story of a pair of friends, Asterix and Obelix, who are sent on a voyage to find edelweiss, known in the tale as ‘Silver Star’, for an antidote to a poison.

The belief in Edelweiss’ magical powers survive to this very day. For instance, Cunningham’s Encyclopedia of Magical Herbs states that when made into a wreath and worn, Edelweiss confers invisibility and protects against daggers and bullets. A popular New Age author of the encyclopedia also believes that Edelweiss grants one’s hearts desire.

With all the mystique surrounding the Edelweiss flower, these tales and fables might not be easy to chew. Accurate or not, this small, non-toxic noble plant, with its snow-white leaves and star-shaped inflorescence, continues to be used in medicine as a remedy against many diseases. Its origins, however, are up to you to decide…