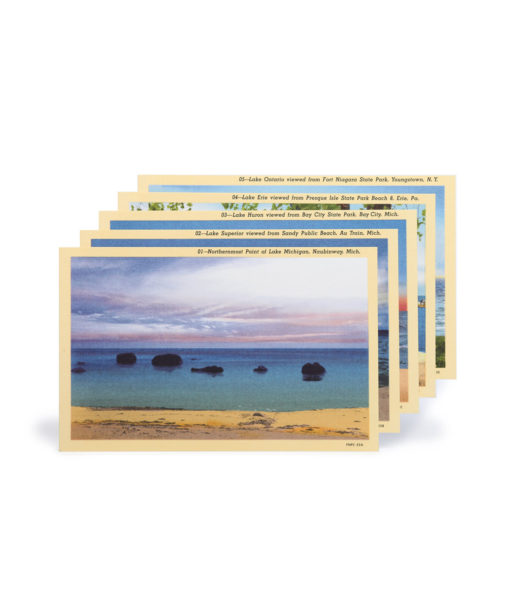 This is the prefect add-on for the Great Lakes edition shown here:  https://www.penloversparadise.com/product/field-notes-great-lakes/

WISH YOU WERE HERE

This Field Notes Great Lakes postcard set contains 5 postcards:  one each for Lakes Michigan, Superior, Huron, Erie, and Ontario, was created as a tribute to Curt Teich & Co., the firm that revolutionized the postcard industry in the 1930s with their dreamy, photographic, hand-retouched “Art-Colortone” linen cards. They’re all ready for a stamp (this one would look particularly good) and a few witty lines to bring a little old-school joy to the mailboxes of your friends and family.

This is the prefect add-on for the Great Lakes edition shown here:  https://www.penloversparadise.com/product/field-notes-great-lakes/

While researching the Great Lakes for our Summer 2022 Field Notes Quarterly Edition, we stumbled across some intriguing postcards of the region from the 1930s. We knew we were on to something special when we discovered that the company behind these enormously popular postcards, Curt Teich & Co, was located—like us—in Chicago. On top of that, the largest collection of these postcards is housed at the famed Newberry Library,  just a mile or so east of Field Notes HQ.

A few days later, Jeffrey L. Meikle’s “Postcard America: Curt Teich and the Imaging of a Nation” arrived via parcel post. Meikle tells the whole story of the era, including an in-depth examination of the technologies and production processes that created these much-loved and frequently-collected cards. As Meikle describes, the company’s “vision now functions both as a powerful artifact of the cultural history of a particular era and as a powerful stimulus to nostalgic re-imaginings of the past.” Consider our set a typology of the Great Lakes.

We set out to produce this set of five cards in a manner true to the way they were originally created. That began with a 1,300-mile road trip to shoot black-and-white film photographs of each of the lakes, like a Teich Co. traveling salesman.

After developing the film with expired Kodak D-76 in a canister in the sink, things got a bit more modern. We scanned the negatives and, having examined the original Teich production files, felt no qualms whatsoever about retouching and coloring the photos beyond recognition. We used the same palette of colors Teich supplied their colorists.

After a consultation on the golden borders that stumped Dr. Meikle himself, we printed the cards on Neenah’s “Avon Brilliant White” linen cover stock. We made every effort to match Teich’s style and process, using modern methods where necessary.