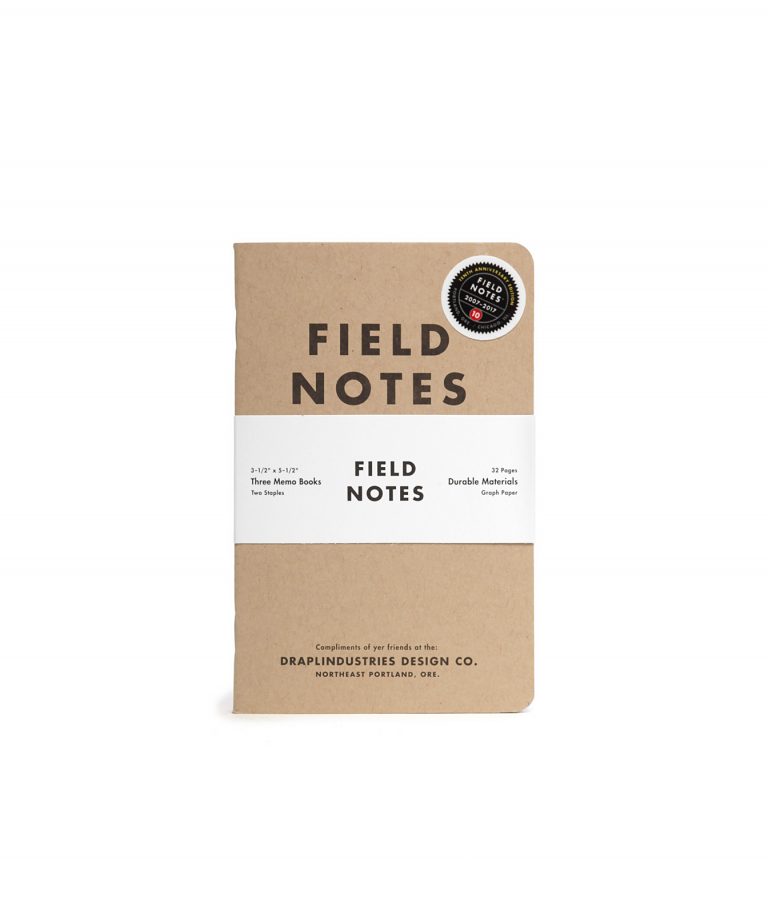 To celebrate Field Notes Brand’s tenth anniversary, we have a new 3-book set.

This was a small notebook with a red-leather-textured hard cover that Field Notes creator Aaron Draplin customized with his Gocco desktop screen printing press, circa 2002. This was Aaron’s first use of the name “FIELD NOTES,” and the first use of the horizontal Futura Field Notes logo. The original version had white print on the cover and spine, and blank body pages.

Aaron’s first printing (200 books!) of Field Notes were a bit taller and narrower, but otherwise pretty close to today’s Field Notes. They were hand-printed, hand-bound, and hand-numbered by Aaron himself in early 2005. He used scraps of paper left over from other projects, so the cover paper varied throughout the original run, but #001 was on French Speckletone. Body pages were cut down from office-supply graph paper. The cover is packed with Draplin Design Co. printing and design wisdom, and the books were given away to DDC friends and clients. And no, that is not a typo.

Our reprint has been adjusted to the canonical 3.5″ x 5.5″ size, with a French “Speckletone Kraft” 100# cover, and 32 pages of simulated old-school graph paper printed on 60# Finch Opaque, with two staples and 1/4″-rounded corners.

Aaron printed a few more runs himself for friends and clients, and in late 2006, sent some Field Notes to Jim Coudal of Coudal Partners in Chicago, and Field Notes Brand (the company) was born. Our memory is a little blurry, but our forensics experts have determined  this design was a 2007 test batch that was never officially sold, but does turn up in the wild occasionally. The next printing, labeled “Second Printing” in its specs, was sold via the Coudal Partners Swap Meat (a dumb, but fun, idea we had) and the launch of fieldnotesbrand.com. Weirdly, this “test batch” featured 32 pages and two staples. We suspect we made them to see if we could get away with fewer pages and staples, and it didn’t feel right, nor did the excessive branding on the body pages. They also had 1/4″ radius round corners, future editions were all 3/8″ except for a couple printings where the printer wasn’t paying attention and we were too polite to insist they fix it. The “No___ of ___” on the cover is confounding, it’s been suggested that they were going to be hand-numbered, but we don’t think that’s the case, it’s more likely that the idea was to number your books as you used them: a fine idea, but how would you determine what to write in the second blank?

Ten years later, we’ve copied them so closely that they’re nearly impossible to tell apart from the originals. The specs are familiar now: 80# French Packing Brown Wrap covers, 60# Finch body with a light gray graph and our logo atop each page. Again, they’re one staple short, and the corners are not-quite-round-enough.

Sure, these books are a little navel-gaze-y, but what the heck, it’s been ten years. They’ve got 32 body pages, weirdly tiny corners, only two staples, and the logo looks a bit naked without the “®” but it was fun to take a look back, and from what we’ve been hearing, our subscribers have been happy to look back with us.